The Man With Two Brains

One year after Steve Martin and Carl Reiner spoofed the P.I. genre in “Dead Man Don’t Wear Plaid,” (their third of four collaborations), they reteamed to do a takeoff on Mad Scientist flicks in this delightful though sometimes uneven comedy. Martin through sheer talent pulls out enough laughs to make it worth seeing. Some jokes may slip by if you’re not familiar with films like “Frankenstein” and “Donavan’s Brain.” Kathleen Turner makes for a perfect slinky, devilish siren, in a perfect send up on her previous femme fatale in “Body Heat,” who marries our crazy hero only to soak him for his money.
Martin portrays brain surgeon, Dr. Hfuhruhurr who has perfected a new type of brain surgery, something called the cranial screw-top method. He uses it to save the life of a beautiful young woman (Turner) he hit with his Mercedes. The woman turns out to be a golddigger who seduces every hunk she meets while avoiding to sleep with her new husband. Frustrated, our hero falls in love with the brain of another woman — a brain that has been pickled jarred by another mad scientist (David Warner). Despite some bits falling flat, there are more than enough good ones, though it never rises to the level of Mel Brooks’ “Young Frankenstein.” 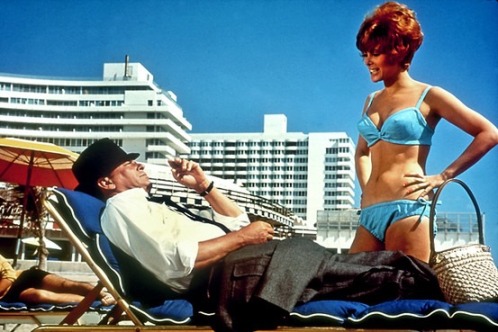 With Tony Rome, Frank Sinatra found the smart ass, wise guy loner role the public always felt the singer/actor was in real life. He’s a bit too old for the role, he was 51, however, that hard, tired face and look surely adds to the aura. So how good, or bad, is Tony Rome? Well, it’s neither. It’s somewhere in that hazy middle ground of shades of gray. One of the film’s obvious failures is the wardrobe choices Sinatra’s Rome wears. He looks like he came out of a 1950’s film complete with fedora and “ring-a-ding” repartee he is given to pontificate. What was rat pack hip in the late 1950s and early ’60s was completely old fashion in the psychedelic world of Purple Haze, Surrealistic Pillows, and Sgt. Pepper in the late ’60s. Worst is the wardrobe he wears when he is on the houseboat where he lives. The Captain’s hat and white slacks are cheesy God awful. That said, Sinatra handles himself well. He’s convincing as the streetwise loner. The plot is a bit convoluted, but then what P.I. film isn’t? Rome is asked by his ex-partner to help get a rich, drunk teen out of a Miami hotel without being seen and keeping the hotel’s name out of it. It sounds like a quick $200 bucks, but of course, it’s not.
The film is lightweight, more like a TV detective show than say The Maltese Falcon. There’s no deep probing into the meaning of life or Rome questioning his own sense of morality. There are no rain-soaked darky lit mean streets that many shamus roam. The setting is Miami and it’s all sunshine and heat. Sinatra is good with the wisecracks; they come quickly and often. There’s a good supporting cast that includes Richard Conte, Jill St. John, Gena Rowlands, and Sue Lyons. There’s also a cameo by the former middleweight/welterweight champion boxer Rocky Graziano, and daughter Nancy Sinatra sings the title song.

THE WILD BUNCH – Both Sam Peckinpah’s “The Wild Bunch” and George Roy Hill’s “Butch Cassidy and the Sundance Kid” released in 1969 take a look at the end of an era: the Wild West. They are two films coming at you from different points of view. Butch Cassidy is a loving, romanticized take on the Wild West featuring two of the most charismatic stars of the era. Butch and the Sundance Kid are outlaws but they are fun-loving and good-humored. It’s an honor, as Woodcock (George Furth) the train employee tells Butch, to be robbed by Butch and his gang. With Butch and Sundance it comes down to that you wouldn’t mind having a beer with these guys. Not so much with The Wild Bunch crew. There is an inherent violent streak in this film whether its kids burning a scorpion, or lawman blatantly gunning down innocent townsfolks while attempting to stop a robbery, outlaws shooting U.S. soldiers, outlaws shooting Mexican soldiers or Mexican soldiers torturing outlaws. They kill for revenge, profit, power, fun, and any other reason. It was a way of life.
The Wild Bunch, like “Bonnie and Clyde” a few years earlier was considered violent and bloody. After more than 50 years of cinematic violence, the shock value had numbed us some but it still holds a grip on the audience. Like Butch and Sundance where the future is seen in the form of a bicycle, here it’s represented by the automobile. The closing final shootout is a violent visually poetic take that closes the book on a way of life. Oh yeah, “The Wild Bunch” is a modern day masterpiece of filmmaking.

For three years, 1906-1909, Lt. Giuseppe “Joseph” Petrosino headed what became known as the Italian Squad of the New York Police Dept. As a detective, Petrosino focused on fighting the Italian criminal element in New York’s Little Italy, a group known as La Mano Nera or the BLACK HAND a forerunner to the Mafia. “Pay or Die” is a vivid account of the life and times of Giuseppe Petrosino. Like most film biographies liberties have been taken but the overall story is true, including an extortion attempt on Opera star Enrico Caruso as portrayed in the film. Though filmed on a studio lot, the film reflects an accurate look at immigrant life at the turn of the 20th Century. Italian immigrants were pouring into the United States mostly from the poorer parts of Italy. Many of these families settled in New York, in what became known as Little Italy. The Black Hand preyed on the Italian community extorting money from store owners. If they didn’t pay, storefronts were blown up or worst. The owners brutally murdered. A note would be left with the body, a black hand imprinted on it as a warning to others. The film provides a tough look at the early days of the Italian criminal element in the United States and how they as predators, extorted and terrorized their own people. The film uses the phrases “Mafia” and “Mafioso” at a time when J. Edgar Hoover only just began to admit that the Mafia even existed (maybe he watched this movie). “Pay or Die” was a small B film that came and went into theaters without much fanfare. Ernest Borgnine is perfectly cast as Petrosino who comes across as a tough honest cop dedicated to cleaning up the Black Hand out of Little Italy and giving honest Italian immigrants the chance to become part of the American dream.

For a time in the 1970s, William Goldman was one of my favorite authors: Magic, Control, Tinsel, and Marathon Man were some of his best sellers. He also was a prolific screenwriter: Harper, No way to Treat a Lady, Butch Cassidy and the Sundance Kid, All the President’s Men, Misery, and The Stepford Wives. He also adapted many of his own novels to the screen Including Magic and Marathon Man. Marathon Man is a fast paced, diabolical thriller about former Nazis, smuggled diamonds, a rouge government agent, and a dentist scene that still brings nightmares to me each time I have a dental appointment. John Schlesinger’s film version is not perfect. If plot holes bother you, it could be bothersome, but putting that aside, it’s a thrilling ride. Dustin Hoffman is well cast and Laurence Olivier delivers a frightening performance. After watching this film, you’ll never want to hear your dentist say, “Is it safe?”