I have been working on editing a new collection of film essays for the Classic Movie Blog Association’s  (CMBA) ninth eBook. Each book has its own theme, Banned and Blacklisted, Underseen and Underrated, and Hollywood on Hollywood to name a few. This book is no different. The subject is Anniversaries. Why Anniversaries, you ask? Well, in October of last year the CMBA celebrated its 10th anniversary, so it seemed fitting. 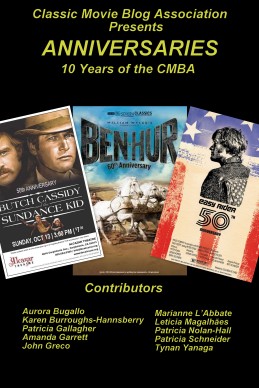 The CMBA began in 2009 as a dream of Rick Armstrong who blogs as the Classic Film and TV Cafe. He was the organization’s first President and its guiding light. Today, there are close to 90 members and going strong.

This book contains 10 essays from celebrating how Butch Cassidy and the Sundance Kid and other films from 1969 bridged the Old And New Hollywood to how the Spanish Flu of 100 years ago affected the film Industry.

Anniversaries: 10 Years of the CMBA book is now available at Amazon for .99 cents (proceeds are donated to the National Film Preservation Foundation, and at Smashwords for free!

I am one of ten contributors to the new ebook, Underseen and Underrated. The book collects ten articles reevaluating and  celebrating little known classic films including Gunman’s Walk, Unfaithfully Yours, 7 Women and my own take on Between the Lines. All proceeds from the book are being donated to the National Film Preservation Foundation.  Available at Amazon.