Jaws has become more than the prototype of the modern blockbuster. With the pandemic, it has become something of a political statement. Specifically, the Mayor of Amity who insists on keeping the beach open because it’s the 4th of the July weekend, and local businesses will be crushed if the tourists stay away. Hey, it’s just a shark. Never mind that people are dying. Putting that aside the film remains a great thriller/horror story perfect for the summer. Jaws is so perfectly paced that one is always on the edge of your seat, tense even when the scary moments turn out to be false alarms, and just when you start to relax it hits you with the real shocks. Like “Psycho” “Jaws” has become a pop culture icon. There are even bits of dialogue that have become catch phrases (you’re gonna need a bigger boat) which is always a sign that a film has moved on to be more than just a great and entertaining film, but is now embedded into our pop culture. 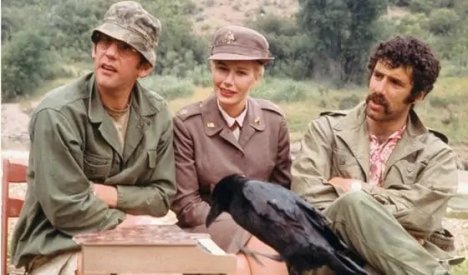 In January 1970, I was back from Vietnam for about five months or so. A four month stint followed in the states at Fort Polk, Louisiana, and now I was on leave before heading off to Germany to complete my three years of service. While home, I was catching up with family, friends, and movies, lots of movies. It’s well known that director Robert Altman used the Korean War as a metaphor for the then ongoing and unpopular Vietnam War. The film struck a nerve. M*A*S*H was a crass, subversive, and sacrilegious anti-war comedy unlike any other. The film not only mocked military bureaucracy and war but religion takes a bit of a beating too. Like Dr. Strangelove, made some six years earlier, the film laughs at the absurdities of war and the bureaucracy behind it. Egotism, incompetence, and piousness all take a shellacking. The only thing our anti-heroes (Donald Sutherland and Elliot Gould as Hawkeye Pierce and Trapper John) value is proficiency in the operating room. When the chips are down, saving the wounded men from the insanity that engulfs the world is what matters. Sutherland and Gould lead an outstanding ensemble cast that includes Sally Kellerman, Tom Skerritt, and Robert Duvall among others. While the film has lost some of its shock value over the years it remains a classic.

Kirk Douglas made for the perfect Vincent Van Gogh. He managed to dig into the emotional depths of his character and is charismatic enough to make the audience believe him to be the tortured artist. It was this movie, and soon after, Irving Stone’s autobiographical novel, that introduced me to the world of art. Eventually, I made my way to read about other artists, going museums and in the process creating a lifelong love for art. “Lust for Life” is the portrait of the artist as someone who suffers for his art. There is rejection and abuse in every one of his relationships. Douglas, in one of his finest performances, was nominated for an Oscar and deserved to win. Instead, the Academy gave the Best Actor award to Yul Brynner for his overly theatrical performance in The King and I.

The Front is a well-intentioned black comedy of an ugly period in American history. The Blacklist ruined many peoples’ lives, destroying careers and livelihood many times without proof or cause. It turned friends and colleagues against each other. Narrow-minded politicians preached hate, and fear listened to by blind narrow-minded followers. The film was written by Walter Bernstein and directed by Martin Ritt, two of the artists blacklisted back in the 1950s. Using Woody Allen as the front lightens the dark subject matter yet they still managed to make a film that conveys the dark times and fears the country was facing in the late 1940s and early 1950s. It didn’t matter if you were a member or not of the Communist Party or were a member sometime in the past. If you were friends with someone who was or had knowledge of someone with left-wing leaning, once they got you in their headlights, called before the HUAC and forced to testify; name names, or be blacklisted. Allen plays his usual self-centered coward who eventually finds himself in deep water when he is subpoenaed because he acted as a front for a few friends on the blacklist. Is the film an oversimplification of what happened, yes, but it works at the limited level it is presented. And it has a great closing line!!! “The Front” had one other special memory. John Lennon and Yoko were in the audience! I spotted them after the film ended and the audience began filing out. I never saw Lennon in concert but I did go to the movies with him,,, sort of.

Murder Inc. mixes facts with a fictional love story. The film allegedly tells the true story of the Brooklyn based independent murder for hire crime organization that carried out assassinations for the Mafia and the Jewish Crime Syndicate. Peter Falk plays contract assassin Abe “Kid Twist” Reles, a cold hearted killing machine, and he is the best thing in the movie. In real life, and in the film, Reles turned rat after he was marked for a contract himself. Both in the film and in real life, Reles died suspiciously when he was tossed out a window of Coney Island’s Half Moon Hotel despite being under 24-hour police protection. The on location shoot gives a realistic feel to it all. The rest of the cast includes Stuart Whitman as his rather stiff self, May Britt, Sarah Vaughn, making her film debut, Sylvia Miles, and Morey Amsterdam as what else but a standup comic. But the worse casting is that of TV comedian Henry Morgan as the real life prosecuting attorney Burton Turkus.