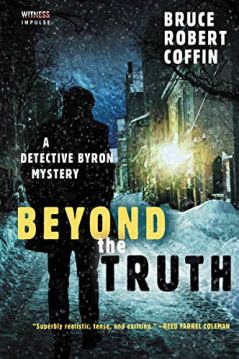 Bruce Coffin is a new author for me, but after reading he’s latest Detective John  Byron novel, number three in the series, I look forward to reading more. Beyond the Truth is a detailed police  procedural. A fast  paced tale about a Portland, Maine police officer, a man with a long and stellar record, who finds himself involved in the shooting of a teenage robbery suspect. The kid, a local high school sports star, had a gun, but no gun is found at the scene. During the investigation, Byron has to deal the press, politicians, and his superiors all with their own agendas that could impede the truth. Meanwhile, Byron has his own personal demons to battle.  Beyond the Truth is a complex tale with nicely drawn characters, and a super ending that won’t disappoint.