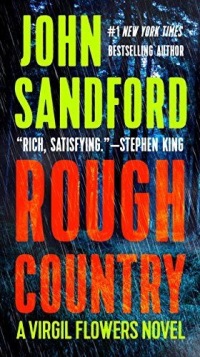 Rough Country is John Sandford’S third novel in the Virgil Flowers series and my first book by the author. While on what began as a relaxing fishing trip in Northern Minnesota Virgil is contacted by his boss Lucas Davenport to check out a recent murder at a nearby resort exclusively for women, some of who are of the gay persuasion. The victim is Erica McDill, an executive from the Twin Cities. shot while kayaking. Virgil teams up with local police as the investigation leads to a series of suspects along with a few more murders.

Virgil is a complex character: a charmer, drinking beers with the locals and as the son of a preacher he at times quotes the bible. He loves the outdoors and has parlayed this interest into a sideline career as a writer for outdoor specialty magazines. As a lawman, he does not like guns, but will use them if necessary. He is cool dude with the ladies, though his love life is practically on hold here since most of the women are gay, and while they are not interested in a sexual romp with him they do remain charmed by this smooth talking but tough law man.

Rough Country is  solid read that will keep you entertained.