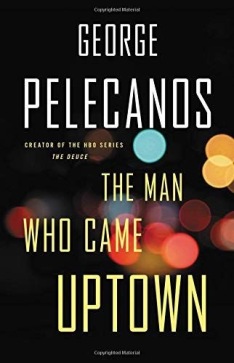 Both crime fiction and book lovers will rejoice after reading George Pelecanos’ latest novel The Man Who Came Uptown. He not only gives us a character dictated crime story, but  pays tribute to book lovers and the joys of reading.

Incarcerated in a Washington D. C. prison,  Michael Hudson discovers a love of books thanks to Anna, the prison’s librarian. Michael’s love of reading opens up new worlds and possibilities that he never imagined. Anna encourages Michael and other prisoners at their weekly meeting to not only read but understand and discuss what the author is saying.

One week Michael does not show up. He’s been unexpectedly released from prison. Charges have all been dropped due to a shady P.I. named Phil Ornazian  who convinced the witness in Michael’s case not to remember a thing. Suddenly, Michael is no longer wearing an orange jumpsuit and is a free man. Phil lets Michael know that he owes him and some day payback will be requested. A free man, Michael is determined to go straight. He gets a job, buys himself a bookcase and books to read.

Ornazian is the kind of P.I. who walks the edge when it comes to good and bad, He wants to provide for his wife and kids and sometimes that means taking a walk on the wrong side of the law. He hates pimps who live off women and helps one hooker get out of the life by robbing the pimp and giving her enough of the money he stole for her to get out of town and start a new life some where far away.

When Ornazian needs a wheel man for one of his jobs, he calls in his favor with Michael Hudson; the dude knows how to handle cars. Michael doesn’t want to get involved, but Ornazian lets him know that the witness who forgot everything he saw could suddenly have an epiphany.

The Man Who Came Uptown is a tale about the love of books and about making choices. The kind of choices we all have to make in life. Sometimes we learn from them and sometimes we die.

One thought on “Book Review: The Man Who Came Uptown”