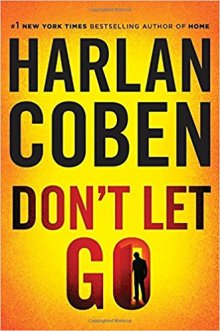 Harlan Coben never disappoints. He’s steady Eddie, always there to provide a thrilling ride. Don’t Let Go is a carryover from last year’s Fall Reading list. The book is a lesson in not trusting everything the government tells you, and sometimes even the people you most admire and love.

Napoleon “Nap” Dumas is a New Jersey detective. A recent murder case brings back questions, and memories, about how his twin brother Leo died some 15 years ago. It’s haunted him daily ever since. No one has been able to explain how Leo, and his girlfriend, Diana Sykes, ended up getting killed in front of a railroad train.

The recent murder is that of Pennsylvania police officer Rex Canton, another high school friend of Nap’s, murdered in his car, the fingerprints of Maura Wells, Nap’s high school girlfriend who vanished without a trace the same night Leo and Diana died, are found at the scene. How can that be? Compelled to investigate, he quickly realizes there is a connection even though the deaths are 15 years apart. Leo, Diana, Maura, and Rex were all members of Westbrook High School’s Conspiracy Club. The club members took a particular interest in a nearby secret military facility. What is the connection? Were they all murdered? What is the relationship between the deaths, then and now, and the secret military facility? Don’t Let Go is intense, fast-paced, and suspenseful as layers of lies, secrets, and deceit are slowly revealed.