Sam Fuller’s gritty war film The Steel Helmet will be on TCM tomorrow, November 9th at 2PM. Below is an excerpt from my book, Lessons in the Dark. 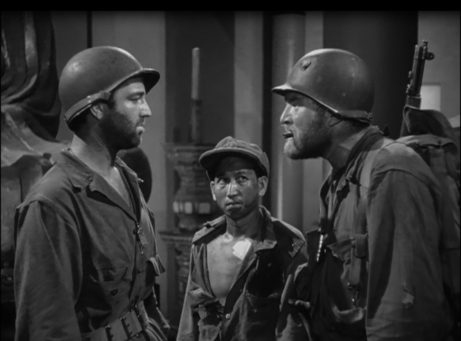 He has been called a guerrilla filmmaker, a primitive filmmaker and a tabloid filmmaker. Whatever title you want to label him with, Sam Fuller’s The Steel Helmet is a low budget masterpiece made for only $100,000 in just 10 days. It may just be the most honest and brutal look at war ever put on film. Produced, directed and written (he used his own diaries as source material) by Fuller, The Steel Helmet is the story of a battle weary Sergeant known only as Zack, the sole survivor in his unit massacred by the North Koreans. As portrayed by Gene Evans, a World War II veteran himself, Zack is cynical, bad-tempered and unemotional.

You can read more about The Steel Helmet and other films including Gold Diggers of 1933, M.A.S.H., Ace in the Hole and Brute Force in Lessons in the Dark available from Amazon.