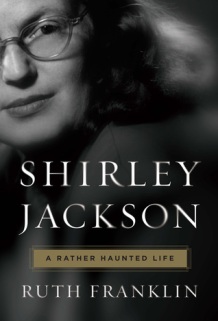 When the 2016 best books of the year lists were compiled, Ruth Franklin’s biography of author Shirley Jackson was conspicuously listed on many of those lists; you couldn’t help but take notice. Jackson, if you are unaware, is best known for her novel The Haunting of Hill House, and her short story The Lottery. The book is extremely well researched with Ms. Franklin given access to many of Jackson’s journals, drafts, notes, letters, and more than 50 unpublished works as well as interviews that she did during her career.

At the time Jackson was growing up, and later as an adult, she lived in a world where men were the dominant force. She came from a prominent family living in the San Francisco area. Her father was an upwardly mobile businessman who rose to CEO in his company. This eventually led to relocating him and his family to Rochester, New York. At the  time, Shirley was still in her teens. Her parents travelled in the upper class circles of the community. Unfortunately, for Shirley, she was not born the petite feminine debuntant her mother’s world encompassed. Shirley was high-strung, creative and untidy. She would spend much time alone, with books, and her thoughts.  Her relationship with he mother was a lifetime of emotional abuse even after she became a successful author. Shirley would forever be the outsider no matter where she lived. She married Stanley Hyman, a brash professor, noted literary critic, writer for The New Yorker, and serial philanderer who like her mother emotionally abused his wife. He also taught, encouraged, dominated and infuriated her.

Unlike many women from her time, Jackson had to manage both a family life; husband, a house full of kids, and a professional career, in this case as a writer. This duel existence was still a rarity and was frowned upon by many who believed a woman’s place should only be in the home. Franklin examines both sides of Jackson’s life, and how each of these separate worlds would influence the other. Jackson would extract many incidents  from her private life finding both the humorous and darker side of what a women’s world was like in mid-20th Century America. Many  would make their way into her novels. It was not always a pretty picture. This is understandable considering her rocky relationship with her own mother, the fact that she was married to a serial philander, and the problems she sometimes faced in the various communities where they lived with neighbors, especially after the publication of The Lottery. In Bennington, Vermont where they moved after Stanley accepted a teaching position at Bennington College, they were met with suspicion by the residents whose families went back generations. Going to the grocery store  or gas station  was an ordeal as neighbors viewed them with  distrust and misgivings.

While Jackson is best remembered for her psychological horror tales, I was surprised by her range when I discovered she had many jobs writing humorous semi-autobiographical family stories for women’s magazines.  These stories were eventually compiled in two books, Life Among the Savages and Raising Demons.

Like most people, Shirley Jackson was a multi-layered individual, and Ruth Franklin’s book digs deep into many of these layers; her loneliness, dispair, successes, humor,   disappointments, and her demons which would eventually catch up with her.