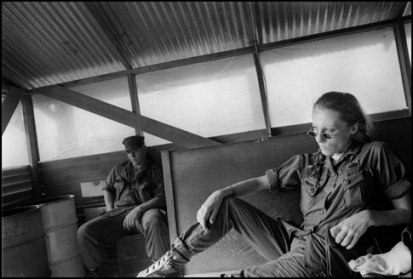 At the age of twenty-one, Catherine Leroy became the first news photographer, male or female, to parachute into combat with American troops in Vietnam. During the 1968 Tet offensive, Leroy and her camera were captured by the Viet Cong. Before managing to convince her captures to release her, she would became the first photographer to shoot images of the enemy in their own back yard. Her story is both amazing and inspiring. 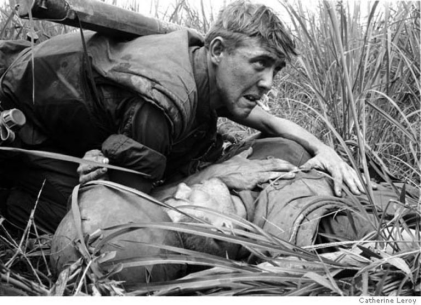 Leroy was born in Paris in 1944 (some accounts say 1945). She grew up in a Catholic convent where she discovered copies of Paris Match magazine filled with images of war. The photos were powerful and made a lasting impression on the petite young girl; she stood barely five feet and weighted less than 100 pounds. With the images of war etched in her head, she recognized both the physical and emotional toll war took on the human condition. Early on she was set on becoming a war photojournalist. At the age of twenty-one with approximately one hundred dollars in her pocket and a Leica M2 in her camera bag, Leroy purchased a ticket for Laos and then on to Vietnam. She did have the name of a contact, Horst Faas, the celebrated photographer who at the time was the Associated Press bureau chief. The year was 1966.

Faas promised Leroy a small fee of $15 for each photo she came back with, if she came back, and the AP used  it. To Faas, Leroy was just another in a long line of wannabe war photographers, some who made it, some who could not and went home and some who died before going home. Leroy went out into the boonies with the grunts and soon began  coming back with one successful photo after another, many of which would appear in magazines around the world, among them Life, Look and Paris Match.

A year after her arrival in Vietnam, Leroy became the first accredited photojournalist to parachute into combat. She was attached to the 173rd Airborne Brigade during Operation Junction City. In 1968, during the Tet offensive, Leroy was captured by the North Vietnamese for a short period. During that time, she managed to convinced the enemy to allow her to photograph them. This resulted in an amazing photo-essay called, A Remarkable Day in Hue: the Enemy Lets Me Take His Picture. It was published in Life magazine and included a cover photo. Soon after, Leroy somehow persuaded  her captives into freeing her. 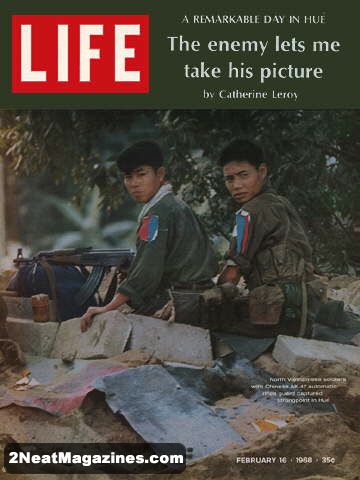 Leroy traveled back and forth to Vietnam for a few years. In 1972, she co-directed, with Frank Cavestani, the documentary, Operation Last Patrol, which follows Vietnam vet Ron Kovic and the Vietnam Veterans Against the War as they traveled to Miami on their way to protest at the 1972 Republican Convention. Four years later, Kovic would write his own version of the events in Born on the Fourth of July, later to be made into a film by Oliver Stone and starring Tom Cruise.

Though barely five feet tall and feather weight, Leroy earned the respect of the tough hard core combat soldiers she followed into combat. She was as tough as the men she photographed and never asked for any special favors because she was a woman. She always carried her own weight. 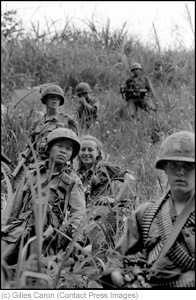 Catherine Leroy in the Vietnam fields with troops

After Vietnam, Leroy, continued to photograph the pain of war around the world including the conflicts in Iran, Iraq, Northern Ireland, Beirut and Afghanistan. Later in her life, she settled in California. She did some fashion work along with selling prints of her Vietnam War work donating profits to U.S. Veteran’s groups.

Leroy was a pioneer and she became somewhat of a legend for both the photographs she captured and the danger she was willing to place herself in including being seriously wounded during one battle. Long after she left Vietnam, Leroy admits that the war and its brutality haunted her for the rest of her life.

In photography, sometimes the reaction shot is the most powerful to capture. For example, in sports, photographing the reactions of the losing team’s players after a big a game would reveal more human emotion than shooting the joy of the victors. If you are a war photographer, the typical shot is the one that shows a solider, or a civilian, bleeding profusely or dead. The real genius though is when the exceptional war photographer captures the nearby surviving soldier, the guy’s buddy, reading the pain, the suffering and human agony  of war written on his face. Catherine Leroy showed us war close and personal.  It was these kind of photographs that first inspired Leroy as a child looking through those Paris Match magazines. It was all about the human condition. 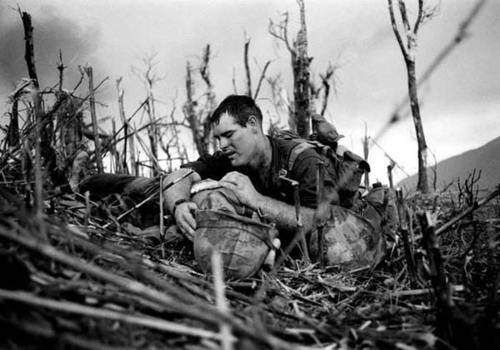 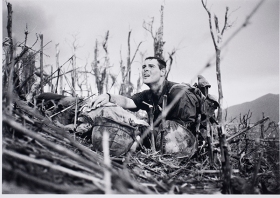 The above photographs are her most famous. They show a Marine looking after a fellow soldier. In the series of three shots the Marine applies a bandage and checks for a heartbeat. Realizing his comrade is dead, he looks up to the sky as if in anguish asking why? There was also a fourth photo showing the Marine jumping up and charging toward the direction the bullets that killed his buddy came from. Leroy recalled, “It was about 4:30 in the afternoon, I was maybe 3 or 3 1/2 meters away. Of course I was as close to the ground as I could be.” She heard the Marine scream as he ran, ” ‘I’m going to kill them all, I’m going to kill them all.’ “

In 2005, Leroy published a book called Under Fire: Great Photographers and Writers in Vietnam. Along with her own work, the book included works by photographers Larry Burrows, Dana Stone and Tim Page along with writers Philip Caputo, Tim O’Brien and Neil Sheehan among others. Among her many honors, Leroy was the first woman to receive the Robert Capa award for her work in Lebanon in 1976 during the civil war. She also was the recipient of the George Polk Award for her work in Vietnam.

Catherine Leroy passed away in 2006 from lung cancer.

There is a 72 minute documentary called, Cathy at War, directed by Jacques Menasche, that chronicles the photographer’s life thru letters, interviews and her work. I have been unable to find out anything else about  it other than back in 2015, there was a one time showing at the International Center of Photography in New York. If anyone know more about it, I would surely be interested to hear.

Australian Photographer/Filmmaker Lucas Scheffel made a short 7 minute film about Leroy focusing on the period of her short capture by North Vietnam.  The film has won various film festival awards and is now available on youtube. Take a look by clicking on the link below. That said, the short is very loosely based on Leroy’s experience, as the director admits. It’s more a reimagining than what actually happened.

All essays and my own personal photographs © John Greco (2016-2019). Unauthorized use and/or duplication of written and personal photographic material without express and written permission from this blog’s author and/or owner is strictly prohibited. Excerpts and links may be used, provided that full and clear credit is given to John Greco with appropriate and specific direction to the original content.

From Short Stories to a Novella in 2020

The creative journey to becoming an author

Insightful Analysis and Commentary for U.S. and Global Equity Investors