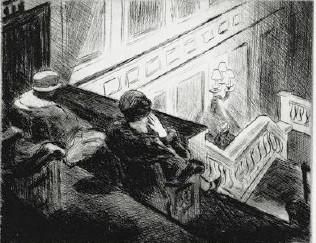 Edward Hopper loved the movies and he reflected that love in many of his works. When Hopper was not in the mood to paint, he would frequently binge on going to the movies where he would sometimes find inspiration. However, unlike most people, for Hopper, movie going was not a communal experience. Instead, as his work bares out, he found isolation and solitude in theaters like he did in his most famous cinema theater painting, New York Movie (permanent collection of the Museum of Modern Art), which shows an usherette standing alone under a light in a side hall just off the main auditorium. 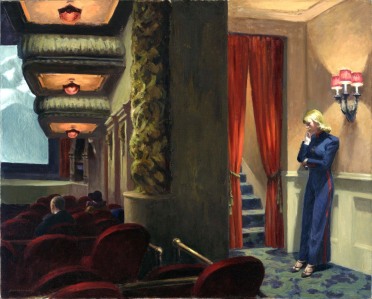 Phillip French writes in his article, From Nighthawks to the Shadows of Film Noir how Hopper influenced film and the other way around. French writes how, “German expressionism impinged on Hopper early on, during his sojourn in Paris. His 1921 etching Night Shadows looks like a storyboard sketch for a high-angle shot in a Fritz Lang movie.” I myself see Lang’s silent classic, M. 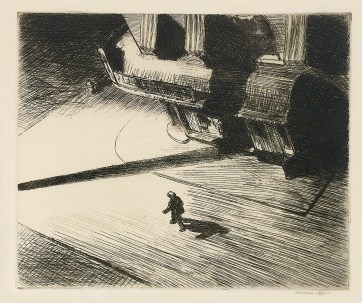 Many of Hopper’s works are voyeuristic; private moments in people’s lives (A Woman in the Sun, New York Interior, Office in a Small City).  Hopper’s influence on Alfred Hitchcock can be seen in Rear Widow (1953) where James Stewart’s photographer, stuck in a wheelchair with a broken leg, sits by his bay window looking out the courtyard watching all the lonely people going about their lives in their apartments. You can see Hopper’s influence again during the opening credits of Psycho (1960) as Hitchcock’s camera moves from a wide view of the city and slowly zooms in on one  window where we discover Janet Leigh and John Gavin in an afternoon tryst. 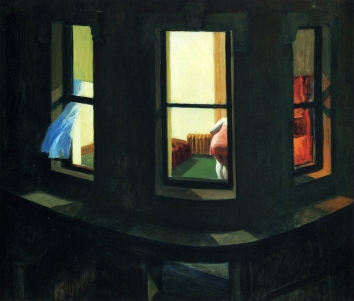 In his most famous work, Nighthawks, Hopper was inspired after reading Ernest Hemingway’s short story, The Killers (1946), where two hitman comes to a small town diner looking to kill Burt Lancaster’s The Swede, a down and out boxer. When Universal Pictures and director Robert Siodmak turned the Hemingway story into a film, Siodmak certainly kept Hopper’s diner image in mind. Another sign of Hopper’s influence is seen in Force of Evil (1948). Screenwriter/director Abraham Polonsky, while on location in New York for his first film, took his cinematographer, George Barnes, to an exhibition of Hopper paintings and told him, that’s the way he wants the film to look. 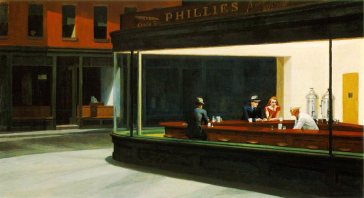 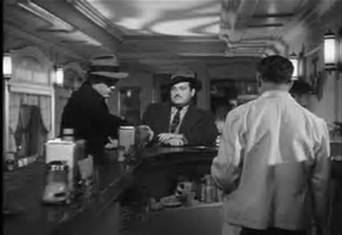 Nighthawks would continue to influence filmmakers and other artists for years to come.  Director Herbert Ross used it as inspiration in his 1983 musical, Pennies from Heaven as did Todd Hayes in Far from Heaven (2002). Tom Waits third album, and his first live album, Nighthawks at the Diner, with a cover design by Cal Schenkel, was influenced by Hopper.  In 1984, artist Gottfried Helnwein did a pop version of Nighthawks called Boulevard of Broken Dreams replacing the everyday patrons in Hopper’s painting with pop icons James Dean, Marilyn Monroe and Humphrey Bogart. The guy behind the counter is Elvis. Later Green Day used Helnwein’s title and created one of their best known songs. 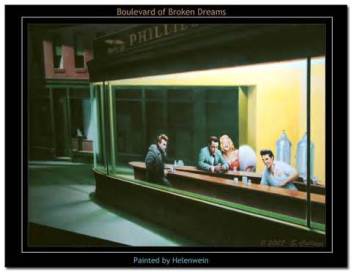 Edward Hopper was not a sociable man. He seems to have had little interest in communicating with or meeting people. Much of his art can be seen as the work of a man who lives within himself.

2 thoughts on “Edward Hopper and the Movies”