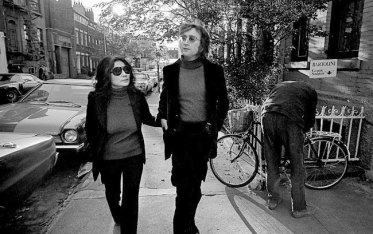 It happened on September 30, 1976. Martin Ritt’s film, The Front, starring Woody Allen, opened that day at the Coronet theater in New York. I have been, and still am, a huge Woody Allen fan since his standup days when I first saw him on the Ed Sullivan Show. 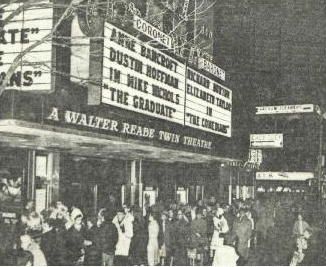 At the time,  I was living and  working in New York. Being the Woody fan that I was, I took a half day off from work to go see The Front. The Coronet theater was located on Manhattan’s Eastside. The Coronet, its sister theater, the Baronet along with the Cinema I and Cinema II were high end  theaters. All the studios and distributors wanted their big films to be booked into these theaters.  Foreign films like Bergman’s Cries and Whispers and Antonioni’s Blow-Up to domestic works like The Exorcist and The Graduate had their premiere engagements at one of these fours theaters located on the Upper East Side. The four theaters filled the entire block, between 59th and 60th streets, except for  a Bookmasters store in between. 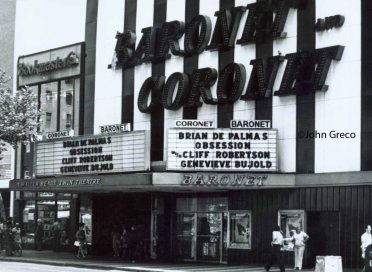 The theater was fairly crowded for a weekday afternoon. In New York, Woody was always a big draw. After the film ended,  everyone began filing out. It was at this time, I suddenly noticed walking out right in front of me among the crowd were John Lennon and Yoko Ono. Growing up in the 60’s, and a Beatles fan, I pretty much stood there stunned. In truth, while I saw the both of them, it was Yoko who I first recognized. I had to take a second look at who was standing next to her. Of course,  it was Lennon.

They and everyone continued to slowly leave the theater.  A few folks said hello and he returned the acknowledge. Most people just looked and gawked, like I did. Some, I am sure didn’t even recognize them, though they are hard to miss. New Yorker’s can be a jaded bunch and seeing famous people in the street is not an uncommon experience. A few famous people though can even shake up the jaded New Yorker. Lennon was one of those.

I purposely stayed a few steps behind them all the way out of the theater until we all were out in the street. For those who are unaware, that block of theaters were located directly across the street from Bloomingdales. That was John and Yoko’s next destination. They crossed over 3rd avenue and disappeared in the department store. I stood by the theater watching them, cursing to myself that I did not have my camera with me. This naturally was in the days long before cellphones.

I never saw The Beatles in concert, but over the years I did get to see Paul, George and Ringo separately in concerts. Never did with John, however, I did get to go to the movies with him… sort of.