My  wife and I recently spent a few days in Maine. One of our stops was the Wadsworth-Longfellow House. Located on Congress Street, the home is now operated by the Maine Historical Society. It is one of the oldest standing structures in Maine as well as the childhood home of poet Henry Wadsworth-Longfellow.

The house was built by General Pelig Wadsworth, the poet’s grandfather, in 1785-1786. The then two story building (a third floor was added in 1815 by the poet’s father) was the first brick structure in the city of Portland. Pelig fought in the American Revolutionary War and later became a Congressman from Massachusetts representing the then District of Maine. He served in that position for fourteen years. Pelig lived in the home until 1806 when he moved to Hiram, Maine.

The poet was born in 1807 and moved into the house with his family when he was eight months old. It was here he wrote his first poems and prose. He lived there until his early thirties.

What is most unique about the house is that approximately  97 percent of the contents (dishes, furniture, books, etc.) are all originals used by the family and not reproductions. This is rare as you probably know. How did all this survive? Well, the poets’ younger sister, Anne Longfellow Pierce, lived in the house for more than eighty-seven years until her death in 1901. Realizing the importance of the family history she kept the house and its furnishings much the same way as it was from the days of her grandfather.  In  her will she left the house to the Maine Historical Society who has owned and operated it since.

Below are a few photographs I took during what turned out to be a private tour.

This item does not look like much at first but it was pretty ingenious. The piece was in the kitchen and placed in front of the fireplace. The back is open and as you can see there is a door in front. If you have not guessed yet, it’s a food warmer. It kept the food warm until it was ready to be served. By the way, the house never got any warmer than 59 degrees. So you can imagine a lot of time was spent in rooms with fireplaces. 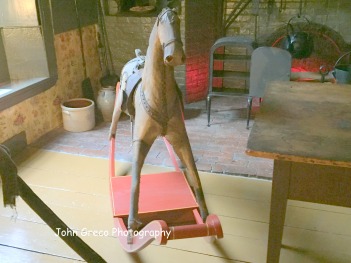 A rocking horse used by Henry and other Wadsworth-Longfellow children through the years. 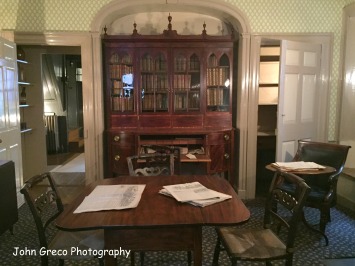 This room was kind of a family room. Henry and his siblings did their homework at the table while their father, a lawyer, worked at the desk.

The desk pictured here is where the poet wrote many of his early poems including The Rainy Day. The poem’s most famous line, Into each life some rain must fall.  He wrote the poem in memory of his first wife Mary Storer Potter who died in 1835 after only four years of marriage.

Portrait of the poet as a young man.