Robert Ryan is TCM’s Star of the Month. On Friday, May 6th beginning at 11am (ET) TCM will be showing 13 films of Ryan’s darkest works including The Racket, Act of Violence, On Dangerous Ground, The Set-Up and Beware, My Lovely.

Ryan co-starred with Ida Lupino in this odd little thriller that will keep you on edge for all of its short 77 minute running time. Ryan plays Howard Wilton, a former World War 1 veteran, and schizophrenic handyman whom we first see running away from his previous job after finding the lady of the house dead. He soon arrives in a new unnamed town where a sympathetic widow, Helen Gordon (Lupino) hires him: its Christmas time and she needs the help at her boarding house. It does not take long for Howard’s perceptions of reality to become twisted as the kindly Mrs. Gordon is soon seen by Howard as suspiciously hostile. She soon becomes a prisoner in her own house. Howard, paranoid, delusional, has locked the doors, pulled the phone out of the wall, cutting off our heroine from any outside contact.

The film is simply constructed, yet soaks the viewer in with a creepy atmosphere primarily driven by Ryan’s outstanding off kilter performance. It also has some striking visual touches that contribute to the eerie mood. One outstanding scene has Helen, believing Howard has left the house, sitting down in a chair next to the Christmas tree, obviously exhausted by her recent ordeal. Suddenly we see a reflection from a couple of hanging Christmas ornaments, its Howard, slowly coming down the stairs unknown to Helen.

Co-star Ida Lupino gives a wonderful performance however, it’s Ryan’s performance as the emotionally disturbed handyman that is the real highlight. Lonely, confused, the psychotic Wilton is a template for many movie crazies yet to come. Ryan and Lupino worked well together and had just completed Nick Ray’s excellent On Dangerous Ground.

With a strong screenplay and story by Mel Dinelli (The Window, The Spiral Staircase, Cause for Alarm), produced by The Filmakers, the company founded by Lupino and her husband Collier Young, Beware, My Lovely is a tight griped thriller. Contributing to the atmosphere is the art direction by Albert D’Asgostino who creates a homey atmosphere set against the terror that is played out. The husband and wife team gave production designer Harry Horner the opportunity to direct, though Lupino did direct a few scenes when Horner’s wife became ill during the production and was hospitalized.

When Beware, My Lovely opened in New York in September of 1952, the ever off the mark, New York Times critic Bosley Crowthers shrugged off the film as having “no other positive purpose than to send shivers chasing up and down the spine.” Well, it is a thriller, what else did he expect? It does the job admirably.

Beware, My Lovely is showing at 2:30am on May 7th. Set your DVR’s. Better yet, set your DVR 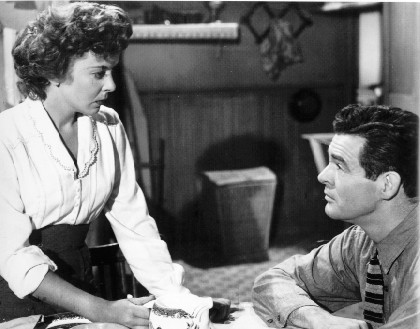 for 11am and record all 13 films. It wiil make for a great weekend festival of Robert Ryan classics.