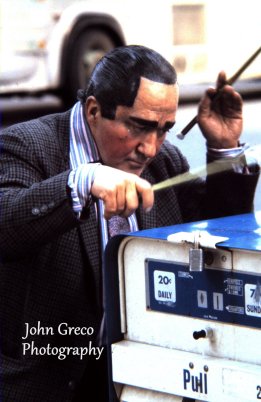 Anyone who has seen Martin Scorsese’s 1976 neo-noir classic, Taxi Driver, will remember the short scene with Street Musician Gene Palma. It’s one of those little bits that remain with you long after the film ends. Palma’s slickly combed shellac like black hair and red makeup made him a unique figure on the streets of New York back in the 1970’s and 1980’s. Palma would flip his drumsticks banging out his music on drums, vending machines or anything else that was available in the Times Square area. Palma’s big dream in life was not only to play like Gene Krupa, he wanted to be Gene Krupa.

Some years back I posted on my Twenty Four Frames Blog, a photograph I took of Palma one afternoon while photo hunting on the streets of New York. Though with only one photo and a couple of written lines from me, the post has become one of my most popular, engaging and informative with many people posting their own memories of Gene. The comments by various contributors were most informative and told part of the drummer’s story of which little is known. I felt the comments deserved more exposure, so I  thought I would incorporate some of them here, giving credit where credit is due.

Palma’s film career was short. After Taxi Driver he appeared in the John Ritter starring Hero at Large for which he was paid $30. He received  $172.50 for Taxi Driver. According to IMDB he had a small part as himself in the documentary  Not a Love Story: A Film about Pornography.

In a February 1981 article from the Lakeland Ledger, Palma said, he plays in the street five days a week and could make a living do that. In the winter, he needed to find other work. It was too cold for him to do his tricks with the sticks.  I have posted the Lakeland article here so you can read it direct instead of me rehashing it. My thank to Shawntok for providing the original link to the article. 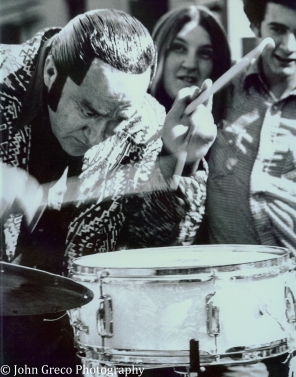 Below are some of the many interesting comments that were left on my original post. They fill in a few holes in the life.

Again with the memories. I feel like Forest Gump when I read your New York based posts. I used to see Gene in Times Square often back in the ’80s. During that same period, I worked at a coffee shop on 6th Avenue and 57th Street called Miss Brooks and Gene came there often; really nice guy, but that hair smelled like hell. – Michael A. Gonzales – Writer

I moved to NYC in June of 1970 and began working in a small ad agency on the top of 580 5th Aveune (47th street). I was previously an amateur drummer and played some R&R in college, etc, and was the biggest Gene Krupa freak on earth (saw him perform live twice before his young death at 64 in 1973). The ad agencies in those days had dozens of deliveries back and forth from “stat” houses (long before computers). Stats were hi quality b&w copies of existing artwork needed to make new ads. Our office was on the top floor of the building and shortly after I began the job, several times a week I found myself riding the elevator with a curious delivery man from one of the stat houses. He would hold those large flat rigid stat envelopes in two hands, and endlessly play the most astounding cadences with his finger tips, right there in the elevator on the backs of those envelopes. Over and over again I was blown away, crippled by what I heard, since I actually recognized dozens of his riffs. Krupa, Belson, Hampton, Rich, you name the drummer, he was right there keeping up with them. In the two years I had that job (1970-72), I must have ridden in the elevator 40-50 times with this mystical man who never said one word to anyone, never made any eye contact and was totally oblivious to the effect he was having on the people who stood with him in those elevator cabs. Imagine how astounded I was four years later when completely out of nowhere, that wonderful guy miraculously appeared on screen as I sat idly watching Scorsese’s epic Taxi Driver! So yes, I can testify that for at least a couple years, Gene Palma delivered stats to New York ad agencies, but all the while his entire being was simultaneously consumed with breathtaking drum cadences. Bravo to Scorsese for bringing this wonderful personality a little immortality on the big screen. – Michael Adams

I remember seeing gene back in the early 80s when I use to cut out of school and go to TS . When I first saw gene he scared the daylights out of me. I found an article on Gene Palma in the LEDGER dating back to February 12th 1981. A reporter spotted gene in Atlantic City and interviewed him. I don’t have the link but if you google ” Gene Palma wants to be Gene Krupa ” I guarantee you will find it – Gary

Last time I saw Gene was in 2002-2003. He was living in a special adult home on 8th ave in Chelsea next to a Burito place called Blue Moon Cafe. I had numerous conversations with Gene over a period of 8 years. Nice man. Good drummer. Liked pastrami. Ate the middle out of pastries. Carried a small suitcase with a pressed suit and shoes inside along with coloring books given to him by Jehova’s witnesses. – Paul Corrigan

I met Gene in the Early 90’s while living in Chelsea. I would see him walking around the neighborhood with his leather jacket and briefcase, head tilted down. I always wanted to photograph him and would say hello when I could. One day he invited me up to his apartment in ’95…I have a half of a contact sheet in the archives somewhere. He was always a kind fellow and a charismatic guy. We took a few photos that day.

btw Mr/ Fisher ‘s photo is exceptional, thank you for sharing that. I am so happy this post exists as well, I was too thinking about Gene and wondering is he is still around. – Robert Adam Mayer – Photographer

Used to work in orange Julius while attending BMCC in 1972 or 73, the one on 7th ave. and 47th, later on 42nd street, that was some experience in gritty Times Square, lemme tell ya. I saw Gene several times around that area, I was a young immigrant, utterly fascinated by this character playing the drums on anything. I was floored when I saw him in taxi driver, then I would see him on the streets, more people around him after the movie came out. That hair, jet black, tinted, seemingly, by a gallon of dye. To me, he is the background music while I remember the TS of that time. – Joe

Does anyone remember a short film involving Gene that ran on Public Access channels in the mid to late 1980s? It chronicled a couple of young people who took an interest of Gene and tried to get him off the streets and into some assisted living program (unsuccessfully I might add.)    – Michael

Saw Gene in June ’77, after having watched Taxi Driver six times (in the theater). Was really thrilled to see the featured drummer on a Manhattan street corner during my first visit to NYC! He had a hand-written sign saying, “as featured in the movie, Taxi Driver. My traveling companion, Ray, and I wondered about his life so we actually followed him one night during our seven day stay. – jrh1254

There are more comments and a few more links on the original post which you can find here.

My thanks to all those who commented and shared their experiences with Gene.