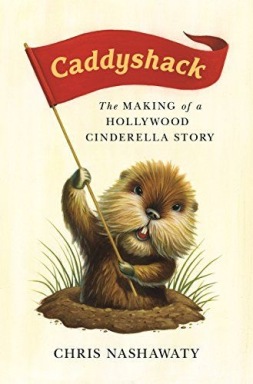 What I liked best about Caddyshack: The Making of a Hollywood Cinderella Story is how it went beyond the standard “making of” books that have previously come out. Critic Chris Nashawaty spends about a third of the book giving us a history of the rebellious new anti-establishment comedy that was in the air. They came from the Harvard Lampoon, National Lampoon, Chicago’s Second City, and Saturday Night Live. By the time of National Lampoon’s Animal House they all came together, both behind and in front of the camera.

After the success of Animal House, Hollywood was hot for another film from the same sources. The result was a way too long 199-page screenplay by Brian Doyle-Murray, Doug Kenny, and Harold Ramis. The problems only built from there. Filmed in Florida, away from the prying eyes of the studio, first time director, Ramis, co-writers Kenny and Doyle-Murray along with cast members Chevy Chase, Bill Murray, and Rodney Dangerfield began to improvise. After all, that’s what they did best. Well almost best, What they did best was drugs; pot and cocaine flowed throughout the entire shoot. The set was one big party! According to the author, the only person on the film who was straight was Ted Knight!

Somehow, thanks to the free-flowing improvisational skills of cast members like Bill Murray, Chevy Chase, and the writers, a disjointed film was made. Many people have complained the film has no plot, and scenes are not connected. They are more like skits. That’s all true, and that is what the studio heads thought after watching the way too long rough cut. They were very nervous. Something needed to be done. That’s when they brought in the gopher!

Nashawaty gives the readers plenty of juicy, outrageous details and background information to enjoy. However, it wasn’t all fun and games; there is a dark sadness overshadowing it all as we follow the meloncholy road of the comic genius Doug Kenny; his depression and drug use accelerating out of control. Kenny would die in Hawaii just one month after the film was released.

Caddyshack is not as funny as Animal House, the studio at first thought they had a disastrous financial bomb, but it made money, thanks mostly to the performances of Bill Murray and Rodney Dangerfield. Over the past four decades it has picked up a cult following, and phrases from the film (Be the ball!) have become mantras, at least for golfers.

4 thoughts on “Recent Read: Caddyshack: The Making of a Hollywood Cinderella Story.”