This is the 5th installment in this series.

Klaus Voormann and Astrid Kirchherr knew each other since their days at art school in Hamburg. It was there they met Jürgen Vollmer, a photographer. Voormann and Kirchherr were lovers, though their relationship was heading toward an end. After an argument one evening, Klaus wandered into the Kaiserkeller a club in a nasty section of Hamburg called the Reeperbahn filled with drunken sailors, prostitutes, gangsters and other sorts. The artsy/beatnik crowd that Voormann, Kirchherr, and Vollmer were part of were more into jazz and coffeehouses that the raucous rock and roll or the Reeperbahn. They wore their hair long, for the times, and leaned toward wearing black clothes. Voormann’s crowd were part of a group known as exis, short for existentialists who read Camus and Sartre.

Depending on what biography you read, on stage at the time were Rory Storm and the Hurricanes whose drummer was Richard Starkey, aka Ringo Starr, or a leather-clad group called the Beatles (the two groups’ alternated sets). Most bios lean toward the Beatles. Either way, the music was loud and raw.

Klaus found the music exciting and the band wild. He could not wait to go and tell Astrid and Vollmer what he experienced.  Astrid Kirchherr was already working as an assistant to photographer Reinhard Wolf and was on the cusp of having a great career of her own. Born in 1938 in Hamburg, Germany to a middle-class family. Astrid’s father was an executive officer in the German branch of the Ford Motor Company. When World War II broke, Astrid and her family evacuated to the Baltic Sea. After the war, they returned to a bombed out Hamburg, but still managed to live comfortably. [1]  She attended Meisterschule für Mode, Textil, Graphik und Werbung in Hamburg to study fashion design. During this period, she also displayed a talent for photography and was convinced by the school’s top photographic instructor Reinhard Wolf to switch courses. After graduating, Wolf hired Kirchherr as an assistant where she still worked when Klaus brought her to the club where she would meet the Beatles.

At first, Astrid did not want to go to the seedy red-light district. Sometime between Klaus’ first visit and the time he got Astrid to join him (timing again differs depending on the biographer), Klaus, who spoke decent English, and was a wannabe guitarist and a graphic designer, just completed a commission to do the cover of the Ventures’ Walk Don’t Run album. [2] He approached John one night showing him the album. John brushed him off, telling him he should talk to Stu, he was the arty one. 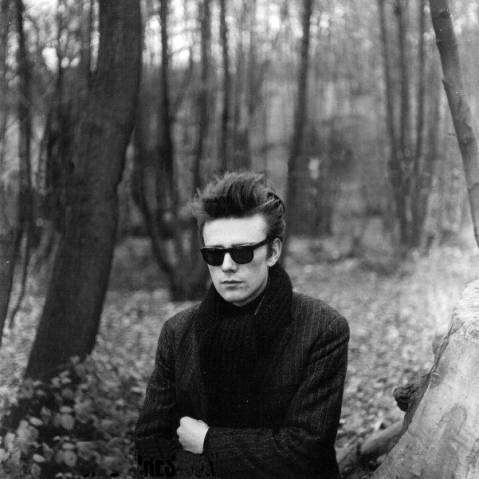 Eventually, after tireless insistence on Klaus’ part, Astrid, along Vollmer, went to the club. The three were blown away by the wild, Gene Vincent, Chuck Berry, Little Richard songs played by the group. Astrid was as captivated as Klaus by the group, and by John in particular, but it was the sunglass-wearing diminutive Stu, the bass player who stood quietly near Lennon on stage that really attracted the young woman and the others in the arty group. Astrid, Klaus, and Vollmer kept coming back to the club, enthralled by the music. At first, Astrid hid her attraction to Stu by using her professional photographer status as a front. She asked to photograph them. The Beatles were flattered, to say the least, that a professional photographer, a beautiful professional photographer, wanted to take their pictures. 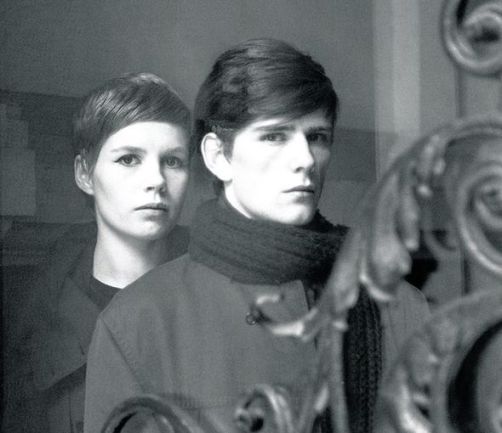 Using a Rolleicord medium format camera and black and white film, Astrid brought the boys to a local amusement park called the Dom. The park had only a few people roaming around that day due to inclement weather. Astrid did not speak much English at the time, so she and the group communicated mostly through various gestures and her positioning the boys the way she wanted them to pose. In those first photos, the Beatles still had their hair combed back in the standard 1950’s-60’s Teddy Boy style of the day. Stu would be the first to change his hair with the help of Astrid. She did not invent the Beatles hairstyle as so often is incorrectly reported. At the time it was a familiar style among their arty/exis crowd including Klaus. The others, except for Pete Best, eventually would follow. 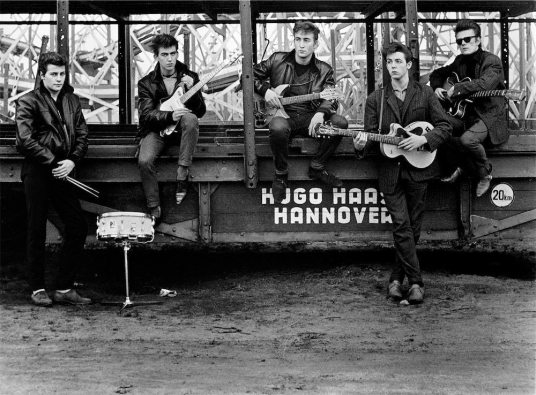 The Beatles in Hamburg – Photo by Astrid Kirchherr

Astrid’s photos captured the rawness, the innocence, the attitude, the tough guy exterior, behind their insecurities, as well as the beauty of the group. For these boys, rock and roll was all there was in life. The boys loved the photographs and posed for Astrid on various occasions. The images from this period, along with photos taken by Jürgen Vollmer[3] have become part of the Beatles legend, in their own way historical documents capturing a moment in time. 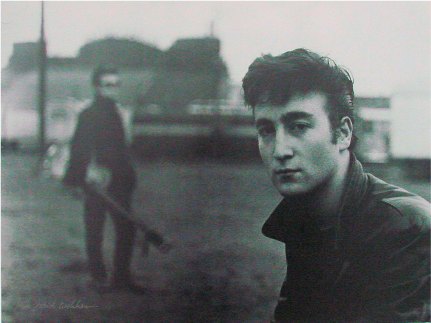 In 1964, while on assignment with photojournalist Max Scheler, for Stern magazine and using a 35mm film, Astrid photographed the Beatles once again during the filming of A Hard Day’s Night. She would also do the album cover for George Harrison’s Wonderwall Music. A couple of years later Astrid gave up her photographic career. She did stay friends with all the Beatles over the years though she lost touch with John Lennon after he moved to the United States. For many years, Astrid sadly saw no income from her Beatles photos though they were used over and over in many publications and bootleg albums.  It was in the 1980’s when she managed to get her original negatives back and her copyright.

Astrid Kirchherr made it to the movie screen in the 1994 film Backbeat which as you would expect is the story of the Beatles during their early days, before fame, playing in the sleazy sections of Hamburg. Kirchherr is played nicely by Sheryl Lee who bears an uncanny resemblance to the photographer. Astrid was a consultant on the film and was interviewed by screenwriter/director Iain Softley as part of his research.

I wrote an article about Backbeat on my film blog, Twenty Four Frames. Instead of repeating much of the information, please jump over to read by clicking right here.

[1] An Interview with Astrid Kirchherr

[2] Klaus Voormann would later design the covers for both  Revolver and The White Album. He also would play on many of the Beatles solo album including John Lennon’s Imagine, Plastic Ono Band, Sometime in New York City, Walls, and Bridges, George Harrison’s All Things Must Pass, Living in the Material World, Extra Texture and Ringo Starr’s Ringo, Sentimental Journey and Goodnight Vienna. He also was in Lennon’s Plastic Ono Band for the Toronto concert and played at the Concert for Bangladesh.

[3] The cover of John Lennon’s 1975 Rock and Roll album features a photograph by Jürgen Vollmer taken during one of the Beatles later trips to Germany. Vollmer nicely captures Lennon’s early rebel image. Wearing a leather jacket, hands in pocket and one foot casually over the other; a combination of early Brando and a young Dylan, framed in an entrance way of an old brick building somewhere in Hamburg. The three blurred figures passing by are Paul McCartney, George Harrison, and Stu Sutcliffe.

11 thoughts on “From Real to Reel: Still Photographers at the Movies Astrid Kirchherr”