Michael Herr passed away on Thursday at the age of 76. His book, Dispatches was and remains one of the premiere books examining what it was like to be a soldier in Vietnam. Herr was a war correspondent with the eyes and ears of a poet. In late 1967, Herr, working at Esquire, convinced his employers to send him on assignment to Vietnam. This was right before one of the deadliest and bloodiest battles of the war, the Battle of Khe Sanh.   It was almost ten years until the book was published in 1977. After its publication, Herr worked on two of the most important films about the Vietnam war. He contributed  to the narration on Francis Ford Coppola’s epic Apocalypse Now (1979) and co-wrote the screenplay, with Stanley Kubrick and Gustav Hasford,  on Full Metal Jacket. The film was based on Hasford’s novel, The Short-Timers. Herr had met Stanley Kubrick in 1980 during an advance screening of The Shining. They became friends which evolved into a creative and artistic relationship.

Below is a paragraph from Dispatches.

“You could be in the most protected space in Vietnam and still know that your safety was provisional, that early death, blindness, loss of legs, arms or balls, major and lasting disfigurement — the whole rotten deal — could come in on the freaky-fluky as easily as in the so-called expected ways.”

The more I looked at this photograph of James Dean, the more fascinating I found it. It looks like it was shot in New York City, most likely in the early to mid 1950’s before Dean made any of his three iconic films. Unfortunately, I do not know who the photographer is but it could be Dennis Stock, (please see comment below from Peter. L. Winker who clears this up. Peter is the editor of the forthcoming book, The Real James Dean: Intimate Memories From Those Who Knew Him Best, to be published later this year). Stock became a friend of Dean’s early on and was one of several photographers who photgraphed Dean during those early times. The painted ad in the background for the 1948 film Brute Force reflects it’s age.

What’s fascinating I felt was the connection the photo makes between the old Hollywood of Burt Lancaster who starred in the film and that of  an actor on the verge of stardom. Not just any up and coming actor but someone who would come to represent the beginning of the New Hollywood and the Youth Culture that would explode within a few years.

You can read about Brute Force in my e-book Lessons in the Dark available at Amazon.

You don’t have to be Catholic, Lithuanian or particularly religious to enjoy a visit to the magnificent grounds of St. Anthony’s Franciscan Monastery and Guest House. It’s located in Kennebunk, ME on more than 46 acres of land. The beautiful and lush landscape was designed by Frederick Law Olmsted, co-designer of New York’s Central Park, The Boston Common and many other urban parks.

What may seem a little strange at first is that the monastery building looks very much like a Tudor style mansion. That’s because it was exactly that years ago. Originally commissioned by William A. Rogers an industrialist from Buffalo, New York who purchased the property in 1900 from the family estate of John Mitchell, a Christian religion professor. Mitchell purchased the land from Lt. General Sir William Pepperrell who took the land from the Indians way back in the late 1600’s.

In 1937, the mansion was sold to Mildred V. and William N. Campbell. Mildred was the daughter of Sanford textile tycoon, Louis B. Goodall. William N. ran the Goodall Mills until 1944. Three years later on September 8th, 1947 William died. That same day, Mildred sold the estate to The Lithuanian Society of Franciscan Fathers of Greene, Maine. The price was a mere $150,000.

Over the years additions were made both inside and outside on the grounds. According to the brochure the Shrine of St. Anthony was added inside the building in 1952. In 1953, the outdoor Our Lady of Lourdes Grotto was constructed. It was designed by Lithuanian Architect Jonas Mulokas, a first prize winner of the American Architect Association. 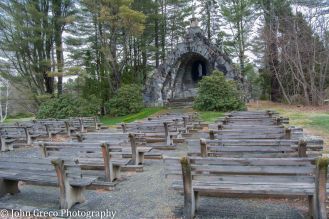 In 1959, a second shrine by Mulokos, the impressive Chapel of the Stations of the Cross was built. 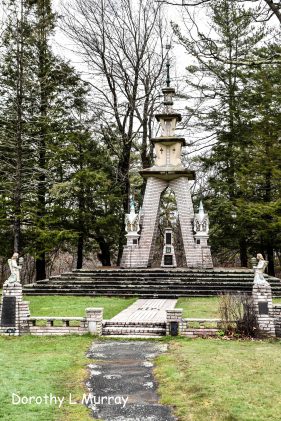 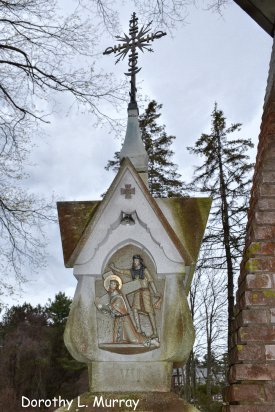 St. Anthony’s Chapel, inside the monastery (mansion), was finished in 1965-66, a combination of old and new world. The architect was Dr. Alfred Kulpa of Toronto, Canada.

The stained-glass windows, chandeliers, candlesticks and other interior decorations were designed and produced by  Lithuanian born artist Vytautas K. Jonyas. Jonyas is also represented outside on the grounds   with a magnificent sculpture pictured below. It originally was designed and created for the Vatican Pavilion at the 1964 World’s Fair in New York. A sign next to the artwork reads “it depicts the church militant, the church suffering and the church triumphant, that is, the church here on earth, in purgatory and heaven. In 1967, the Franciscan’s in Kennebunk, ME dedicated this historical work of art to the silent church in Lithuania.”

Strictly for boys of Lithuanian decent, St. Anthony’s High School which closed in 1970, had a student body consisting of Lithuanian boys from all over the country and Canada. They lived at the school as well as studied and performed all other forms of high school activities such as sports. All under the watchful eyes of the Franciscan Fathers.

The Franciscan Guest House I mentioned early on is also on the grounds. While it is a separate entity from the monastery, they both share an awareness or an appreciation for Lithuania. The main building, there are various smaller buildings that also have guest rooms, was originally the boys’ high school. From the outside, it looks like a school. Inside, it has all been reconfigured with individual rooms and baths.

Today, the former high school, now a guest house consisting of 65 rooms is a pleasant place to stay while visiting the Kennebunk/Kennebunkport area of Maine.

Below are a few more photographs. 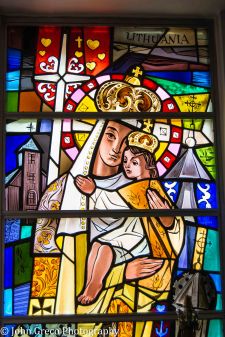 Stained-glass window inside the side chapel. 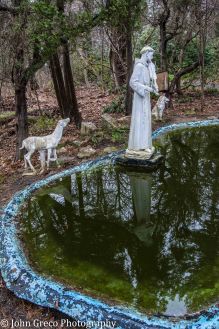 Out Lady of Fatima

Jacqueline Lynch, author Ann Blyth: Actress, Singer, Star and many other books, as well an ace blogger at Another Old Movie Blog reviewed my book, Lessons in the Dark. There is also a short interview. Check it out at the link below.

Check out Jacqueline’s books at Amazon at the link below

And you can read my interview with Jacqueline right below.