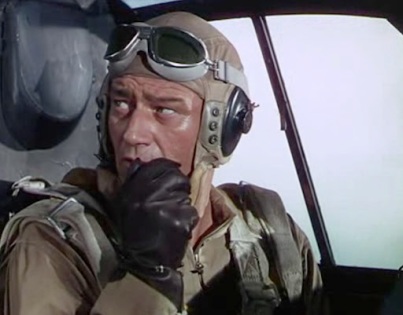 This weekend TCM pays tribute to America’s fallen heroes with three days of mostly pro-war films  like The Flying Leathernecks (1951) and They Were Expendable (1945) both featuring the always hard-ass but plastic patriot John Wayne. When the war broke out stars like Henry Fonda, Robert Stack, Clark Gable and James Stewart joined the military.  Wayne on the other hand did not. Though eligible, he felt his career was more important. Wayne managed to obtain a 3-A status, “deferred for family dependency.” He had four kids. Additionally, El Duko’s career was  not on solid ground at the time. He had just completed Stagecoach and was on the road to stardom. Four or five years of military service could have ruined that. Additionally, actor’s in general, were given a bit of leniency because the Gov’t considered Hollywood a propaganda machine for the war effort.

Wayne made more than fifteen movies during the war including four war films, The Flying Tigers (1942), The Fighting Seebees (1944), Back to Bataan  (1945) and They Were Expendable (1945). He fought hard, he fought heroically,  he fought in some of the biggest battles on  celluloid.

As the war went on, more Americans were needed in uniform and Wayne was one of many re-classified as 1-A, eligible to serve. To his credit, there seems to be no record that he objected or fought the re-classification. However, Republic Pictures, who Wayne was still under contract to, did request he be re-classified again. This time with a 2-A deferment in the name of national interest. Wayne was Republic’s biggest star and they did not want to lose him.

Pat Ford in his book on his grandfather, Pappy: The Life of John Ford claims Ford tried to get Wayne a commission and attached to his OSS Photographic Unit, however Ford writes “…that the billets were frozen in 1943. John (Ford) couldn’t get Wayne in as an enlisted man, much less an officer.”

Meanwhile, Henry Fonda enlisted in the Navy where he served for three years. He  was honored with a Bronze Star and Presidential Citation Award rising to the rank of Lt. Junior Grade. James Stewart enlisted in the Army becoming a member of the Army’s Air Corps where he became a bomber pilot and a command level officer during the war. He flew at least twenty bombing  missions including bombings over Berlin and Frankfurt. By the end of the war he rose to the rank of Colonel. Stewart’s military career continued after the war as he became a member of the U.S. Air Force Reserves rising to the rank of Brigadier General.

John Wayne, celluloid hero, yes. American hero? Not so much.